The spotlight of attention is more like a strobe, say researchers 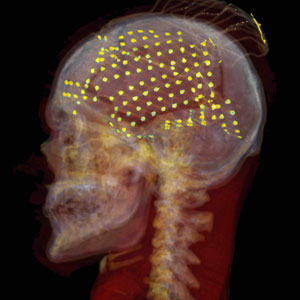 You don’t focus as well as you think you do.

That’s the fundamental finding of a team of researchers from Princeton University and the University of California-Berkeley who studied monkeys and humans and discovered that attention pulses in and out four times per second.

“Our subjective experience of the visual world is an illusion,” said Sabine Kastner, a professor of psychology and the Princeton Neuroscience Institute (PNI). “Perception is discontinuous, going rhythmically through short time windows when we can perceive more or less.”

The researchers use different metaphors to describe this throb of attention, including a spotlight that waxes and wanes in its intensity. Four times per second — once every 250 milliseconds — the spotlight dims and the house lights come up. Instead of focusing on the action “onstage,” your brain takes in everything else around you, say the scientists.