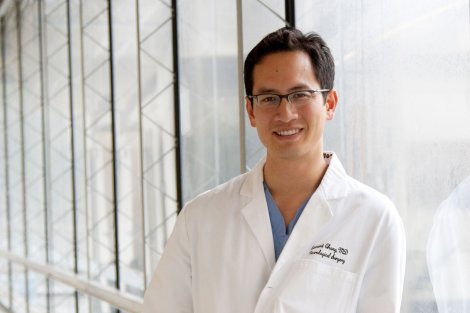 Edward F. Chang, MD, a UC San Francisco physician-scientist whose seminal research has provided deep insights into how speech and language are processed in the human brain, has been named the 2015 Blavatnik Laureate in the Life Sciences.

Chang’s award is one of three Blavatnik National Awards for Young Scientists, which are given annually by the Blavatnik Family Foundation and administered by The New York Academy of Sciences, which said that the prizes “honor the nation’s most exceptional young scientists and engineers, celebrating their extraordinary achievements and recognizing their outstanding promise while providing an unparalleled prize of $250,000 to each National Laureate, the largest unrestricted cash award given to early career scientists.”

In a first for the Blavatnik National Awards, which have been given since 2007, all three of this year’s recipients are members of the faculty of the University of California.

“We at the University of California are very proud of the three UC researchers who have been honored with Blavatnik National Awards for Young Scientists,” said UCSF Chancellor Sam Hawgood, MBBS. “At UCSF, we are especially gratified by the recognition of Dr. Chang, who received his medical degree and completed his residency here. His innovative research as a member of our faculty has given us an unprecedented window into the unique ability of the human species to use and understand language,” he said.

“Our 2015 National Laureates have made incredible discoveries early in their careers,” said Len Blavatnik, founder and chairman of Access Industries, head of the Blavatnik Family Foundation, and a New York Academy of Sciences board governor. “On behalf of the Blavatnik Family Foundation, I congratulate the Laureates and the National Finalists and look forward to their future discoveries. This award will help to provide them with the freedom to pursue new ideas and further innovation.”

The Brain’s Comprehension of Human Language

Chang is a neurosurgeon specializing in the surgical treatment of epilepsy, but he has been immersed in basic neuroscience research since his first year of medical school at UCSF. His professors “opened [his] eyes to the beauty of the nervous system,” Chang said, and they encouraged him to take time off from his medical school studies to work in a neuroscience laboratory and learn the basics of research.

Chang’s research, which aims to understand the uniqueness of human language by monitoring activity patterns in patients before and during surgery, has made a major impact in a number of fields, including linguistics, psychology and biomedical engineering. His lab has established a basic “blueprint” of how the brain allows us to speak and hear by recording and analyzing responses to nearly every speech sound in the English language.

“Dr. Chang has accomplished a hugely impressive and exciting body of work in a very short time – just five years since he established his own lab at UCSF. The work is unique and has already transformed our understanding of that most human of behaviors: language and speech,” said Carla J. Shatz, PhD, the Sapp Family Provostial Professor at Stanford University School of Medicine, a member of the national jury for this year’s Blavatnik National Awards.

“It is so gratifying to be recognized, especially at a relatively early stage in my career,” Chang said. “Getting to this point required so much sacrifice and support from my family. In addition, our research requires such a special collaboration with our patients, who volunteer to participate during their surgeries. Sharing this recognition with them gives that much more meaning to what they have contributed.”

A Sweep for University Of California

Also honored this year is the 2015 Blavatnik Laureate in Chemistry, Christopher J. Chang, PhD, chair and professor of chemistry and of molecular and cellular biology at the University of California, Berkeley. Chang (no relation to Edward Chang) is honored for discoveries that span both neuroscience and energy science. Syed A. Jafar, PhD, professor of electrical engineering and computer science at the University of California, Irvine, was named the 2015 Blavatnik Laureate in Physical Sciences and Engineering. Jafar is recognized for his work on interference alignment in wireless networks, which has changed the field’s thinking about how these networks should be designed.

The three National Laureates were selected from nominations submitted by 147 of the nation’s leading universities and research institutions, representing 39 states. Names of highly qualified nominees were also submitted by members of the Blavatnik Awards Scientific Advisory Council. Starting with a pool of 300 nominations of exceptional faculty-rank researchers, the awards jury, composed of some of the world’s most eminent scientists and engineers, conducted a rigorous review, first narrowing down the selection to 32 National Finalists, and then to the three National Laureates.

The three laureates and 29 finalists will be honored at a black-tie ceremony on Monday, Sept. 28, at the American Museum of Natural History in New York.